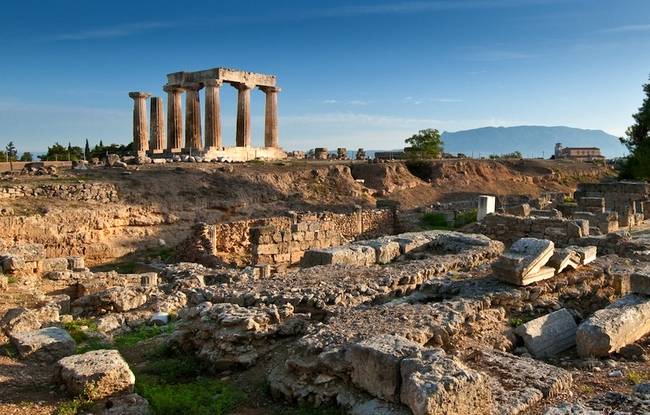 The city of Corinth is geographically located in a narrow land area, known as the Isthmus of Corinth, which connects the region of Peloponnese to the mainland of Greece. The Isthmus of Greece, which was formerly used for the transportation of ships, is nowadays cut by a canal which is used for the purposes by which the isthmus was used before.

Corinth is the capital of Corinthia, a prefecture which belongs to the Greek region of the Peloponnese. Towards the western area of the city and the isthmus there is the gulf of Corinth, towards the east there is the Sacronic Gulf, and towards the south west, at about 50 miles, there is Athens. Besides this, there are several small islands or islets surrounding Corinth: Kechries, Lechaio, Isthmia, Ancient Corinth, and Examilia.

The city of Corinth has gone through several different époques as well as it has had a variety of denominations. One of the first denominations it had was Korinthos, but this name would change depending on different invaders and on who was in control of the town at different given periods.

The origins of Corinth date from as long ago as the 6th century BC, in the Neolithic Age. According to some discoveries, during the year 2000 BC, the city was almost entirely destroyed. Next in the town’s history, another important event happened during the Mycenean period, when the Dorians tried to invade and take the control over the town. The Dorians failed the first time, but succeeded after trying again, and settled in Corinth for a while.

Nowadays, an important part of the old city of Corinth can not be visited anymore due to the fact that it was partially destroyed by an earthquake towards the last years of the decade of 1850. Despite of this, there still are many interesting historical spots that visitors can meet in the city and its surroundings, as well as a variety of entertaining things to do. Corinth, as well as the entire prefecture of Corinthia, is a very attractive Greek destination which combines an amazing historical past with modern life in a unique way.

Smart Tips To Enjoy Affordable Trip Around the Globe