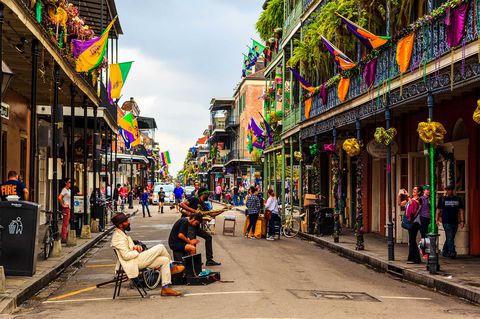 In August 2005, Hurricane Katrina smashed into a heavily populated part of the USA, specifically the city of New Orleans in the state of Louisiana.

Known as the “Crescent City”, the city of New Orleans, in the US state of Louisiana, had a population of just under half a million people, with Greater New Orleans bringing the figure up to 1.3 million. One quarter of the population was under the age of 18, according to the 2000 census, and one-third was aged under 25.

“New Orleans” is usually pronounced by locals as “Noo Aw-lins”.

The US federal government has a significant presence in the area. The NASA Michoud Assembly Facility is located in the eastern portion of Orleans Parish. Lockheed-Martin also has a large manufacturing facility located in the Greater New Orleans area that produces external fuel tanks for space shuttles.

New Orleans is in the Mississippi River delta and has always had a history of flooding. The first levees were built by French prison labour around 1718 and were only three feet tall.
The founding site was a rare selection of higher ground along the flood-prone lower Mississippi. Still, much of the city is located below sea level between the Mississippi River and Lake Pontchartrain.

Despite its economic and geographical disadvantages, New Orleans was famous for being a city of entertainment and excitement, both exuberant and hedonistic. It was a genuine world-class tourist destination, attracting visitors with the annual Mardi Gras (held on the iconic Bourbon Street) and the college-level “Sugar Bowl” gridiron match. Areas of the French Quarter and Central Business District in recent years began catering to booming tourism rather than residents and local businesses. The city’s charm increased when streetcar upgrades in Canal Street were completed as recently as 2004.

The city is also world-famous for its food. Specialties include beignets, square-shaped fried pastries that are sometimes called French doughnuts (served with coffee and chicory “au lait”), Po’boy and Italian Muffaletta sandwiches, Gulf oysters on the half-shell and other seafoods, etouffee, jambalaya, gumbo, other Creole dishes, and the Monday evening favourite of red beans and rice.

Only time will tell if the desire exists to resurrect this famous city. The hurricanes, the flooding and the problem of the disappearing wetlands have not been defeated.

Want To Know The Language Of An Airline Flight Attendant? Your Guide To The...

Cheap Hotels in Boston Overview: Tips on Selecting a Hotel Near Fenway Park and...