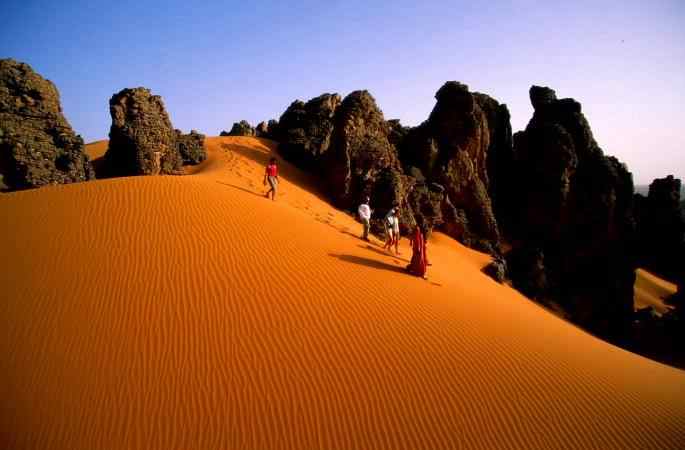 Algeria, The People’s Democratic Republic of Algeria, is a country located in north parts of Africa. Algeria also happens to be the second largest country on the entire African continent. Algeria is bordered by Tunisia to the north east, Libya to the east, Niger to the south east, Mali and Mauritania to the south west, and Morocco. Algeria is only a few kilometers away from its annexed territory, Western Sahara, which is located in the west. Constitutionally, Algeria is an Islamic, country.

Most of the Algeria is coastal area which is hilly, often times even mountainous. This terrain makes for few good harbours. Just south of the coast there is an area known as the Tell, which is extremely fertile land. The Atlas mountains are further south, and even further south is the Sahara desert. Some of Algeria’s main cities are: Oran, Algiers and Constantine.

Algeria’s climate is extremely hot. Humid at the coats and dry the further inland you travel. Although the climate on the coast is mild, the winters in the mountainous areas can be incredibly severe. Algeria is a very vulernarable country to sirocco, which is a hot dust and sand wind that can rip through the country in the summer.

Despite its turbulent past, Algeria is today one of the most popular destinations among tourists visiting the countries of North Africa. Inhabited since prehistoric times, it has been the cradle of many both sedentary and nomadic Berber populations. The arrival of the Romans is testified by the massive presence of funerary inscriptions, archaeological sites and ruins, such as those of Orane, Costantine and Bejaia.

Among the Roman ruins of Timgad and Djemila and the Moorish architecture of the northern cities one has only to choose where to start the discovery of a country that is much more varied and full of ideas than one might think. Here, the Sahara is a very important presence and offers those who venture there under the watchful eye of a local guide, some of the most beautiful and stunning landscapes in the world. Do not miss the views that the regions of Cabilia and Aures offer. And if you want to visit an authentic oasis surrounded by a large palm grove and characterized by Sudanese-style houses in red ocher, you can not miss a visit to Timimoun.

The oasis offers an exceptional view of ancient salt lakes and the sea of ​​sand of the western Erg, dotted with small oases that are difficult to see at first glance because they are partially hidden by sand. It is no coincidence that Timimoun has been dubbed “the queen of the desert”. As for the cities beyond Algiers, famous for its medina, there are Tlemcenle with its mosques, Ghardaia where you buy excellent carpets, the architectural beauty of El-Oued and the Roman ruins of Timgad. And if you are looking for a place to meditate and find yourself you can follow the traces of Father Charles de Foucauld and go to the discovery of the peaks of the Atakor Massif that is located in the heart of Hoggar and is characterized by its landscapes of stone and rock and its peaks that exceed 2500 meters.

How to Fly to Hyderabad by Paying Less

6 Reasons Why Ireland Is a Must-Visit Destination